We get 100s of hits daily, so publish with us 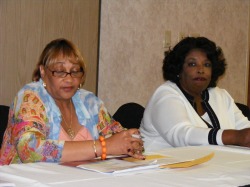 Transdisciplinary research studies are increasing in our literature

The future is looking very bright.  When the notion of leaders and leadership is broadened and “lens shifts” to include more parents, educators, athletes, activists, laborers and students, etc., this immediately refutes a common media image that the black community is rudderless.

Transdisciplinary Studies is now crucial in this broadening process.  Transdisciplinarity has been defined as “a new form of learning and problem solving, involving co-operation among different parts of society (incl. academia), in order to meet complex challenges of society."  It goes far beyond traditional research and intellectual projects done primarily in the classroom and within the Academy.

For example, African-Americans and other Acknowledged Africans have over the years looked at their media images, roles and performances from a lens that captures the African presence within five groupings.  These images and roles may also equally apply to Acknowledged African (black) leadership:

·        “Kings and Queens” (those characters that African-Americans deeply admire)
·        “Divas and Players” (a.k.a. hustlers, argumentative and cantankerous characters)
·        “Self-haters and Villains” (a cross between Donald Bogle’s “Uncle Toms” and “Coons”)
·        “Brothermen, Sisterfriends and Lovers” (very close attachments to)
·        “Props and Tokens” (backdrops to an Unacknowledged African dominant environment)

This coupled with African-centered scholarship, and the growing acceptance from people of all ethnicities that there is only one race -- which is the African race, which is the human race --  is changing numerous paradigms for the better.


CLICK & PICK approach to research relevance...
Click any of the past and current journal volumes...
Pick the volume theme and then decide if your research projects fit...